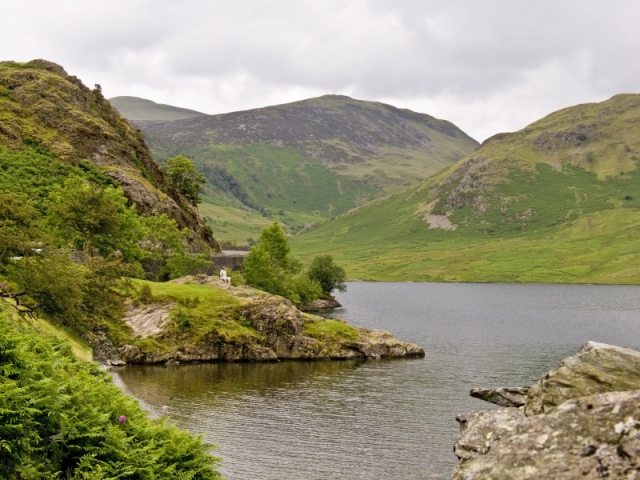 The Lake District National Park has many glacial valleys containing numerous lakes which are what gave the area its name. The mountains of the Lake District National Park are rocky and moorlands are found at lower altitudes. The national park’s maritime climate provides for relatively moderate temperatures most of the year. Snow fall can occur between November and April at the higher elevations, however, hill fog is common year around and sunshine in the national park only averages between two and five hours per day, depending on the elevation and the time of the year.

Its location on England’s northwestern coast and its mountainous geography, all help to make Lake District National Park one of the dampest places in England. This provides an excellent home for the numerous mosses, ferns, lichen, and liverworts that thrive in the national park. Colonies of sundew and butterwort, two of the few carnivorous plants native to Britain, are also found in Lake District National Park. Deciduous woodland, including British and European native oak woodlands are found on the national park’s slopes, supplemented by introduced conifer plantations.

The magnificent landscape of Lake District National Park has been influential on the lives and works of some of England’s best-known writers. Two of the famous authors who have lived in this magical place include William Wordsworth, one of England’s most famous poets, and Beatrix Potter, author of some of the world’s most loved children’s books. Some of the other poets and writers who have spent inspirational time in the Lake District include Samuel Coleridge, Thomas de Quincey, John Ruskin, Percy Bysshe Shelley, Sir Walter Scott, Nathaniel Hawthorne, Robert Southey, Arthur Hugh Clough, Henry Crabb Robinson, Thomas Carlyle, John Keats, Lord Tennyson, Matthew Arnold, Felicia Hemans, Arthur Ransome and Gerald Massey. The Lake District’s ties to famous artists and writers has done much for the national park’s cultural tourism, which is becoming an increasing portion of the area’s tourist industry. Tourism, as one might expect is the Lake District National Park’s major economic impact.

Sorry comments have been eliminated due to excessive spamming