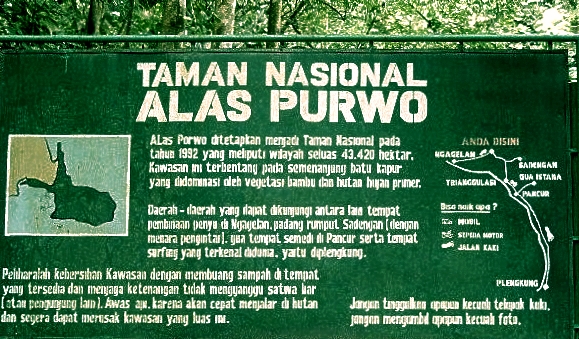 The Mangrove forest is home to the Mudskipper, a completely amphibious fish that can use its pectoral fins to walk on land and has the ability to breathe through its skin and the lining of its mouth and throat. This little fish can be found in mangrove ecosystems and mudflats of Asia, Africa and Australia.

In Alas Purwo National Park the tropical deciduous forest merges into the savannah of Sadengan. The Sadengan savannah is a 200 acre grassland ecosystem with trees widely spaced apart which allows sufficient light to support grasses and other low growing plants. Several plant species found on the Sadengan savannah include Cyperus brevifolius, Cyperus iria, Cassia tora, Eupatorium inulifolium, and Lantana camara; the latter three species are non-indigenous and were introduced into the national park.

Over 500 different species of plant are found in Alas Purwo National Park, including giant clumping bamboo (Gigantochloa manggong) and 13 other species of bamboo. 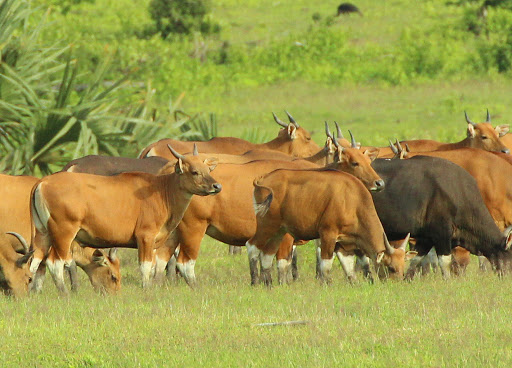 Alas Purwo National Park is home to several rare and endangered species including the Javanese bull, also known as the banteng (Bos javanicus), and the dhole (Cuon alpinus). The banteng is an endangered species of wild cattle with less than 10,000 individuals still in the wild. The population of banteng in Alas Purwo National Park has increased from about 60 in 2004 to more than 100 currently. The dhole is an Asiatic wild dog. It is estimated that there are less than 3,000 individuals of this diurnal pack hunting species left in the wild. 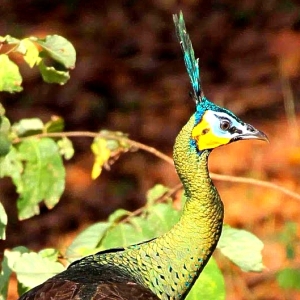 The coral reefs off Alas Purwo National Park are homes to whole communities of marine life, including shellfish, sponges, crustaceans and various marine plants. The water off these white sand beaches is clear and the coral form a garden of amazing forms and colors. Some of the marine fish present include species of clownfish, damselfish and wrasse.

Between the months оf March аnd November, surfers frоm аll оver the world visit Alas Purwo National Park. Their destination іs the white sands of Plengkung Beach, known as one of the best surfing beaches in the entire world. First discover by professional surfers in 1972, Plengkung Beach faces Grajagan bay, and so hаs become known аs “G-Land”. This pristine beach is surrounded by beautiful tropical forest and has rideable wave up to 15 feet. Plengkung Beach offers one of the world’s most consistent left-hand reefbreaks, but it is recommended for experienced surfers only. Most surfers come via boat from Bali, whіch іs аbоut half а day’s travel.